Bollywood actress Kangana Ranaut’s upcoming film ‘Thalaivi’ is currently in the news. Kangana Ranaut will be seen playing the role of late Tamil Nadu Jayalalithaa in this film. Recently, the first look of the actress was revealed in the film. Kangana is gearing up for her upcoming film Thalaivi and the actress is seen working hard for her role. From prosthetics to dance practice, Kangana is preparing to do all the work perfectly. The proof of this is given by the actress’s sister Rangoli from her social account.

Rangoli recently shared a dance video of Kangana in which the actress is seen practicing ‘Bharatanatyam’ for Thalaivi. Actress expression in Bharatanatyam is excellent. In the video, Kangana is seen in a white traditional dress. Rangoli shared this video of Kangana and appreciated the hard work done by her sister.

Beyond the fake glamour of showbiz this is what an artist workshop looks like, blood or sweat on battle field, various languages and accents or hours of practice to perfect one step… there is one truth to acting dissolution and SKILL 🙏 pic.twitter.com/gnVBaUAaFl

Apart from Kangana Ranaut in the film ‘Thalaivi’, South star Arvind Swamy will also be seen, who will play the role of MGR in the film. Vijay will direct this film. The film will be released on June 26, 2020. 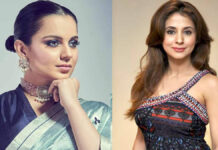