Talented actor Sree Vishnu made some content-oriented movies like Mental Madhilo, Needi Naadi Oke Katha and the recent hit Brochevarevarura. Currently, he is working for yet another unique entertainer called Thippara Meesam directed by Asura fame Krishna Vijay. Previously The makers has released a special poster of the film on the occasion of the Independence Day. The film is currently in the post-production stages and the makers will reveal the release details soon. Meanwhile, the makers have released the teaser of the film. Teaser looks intense and hinted that the movie is an action packed in which Nikki Tamboli will be romancing with Sree Vishnu. Thippara Meesam is being bankrolled by Rizwan Entertainments and Krishna Vijay Productions. 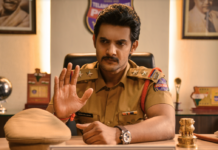